Solutions may be prepared from powders as indicated earlier or from liquid solutions or liquid concentrates. In using liquid concentrates, the patient is instructed to add the prescribed amount of concentrate (usually a teaspoonful or capful) to a certain amount of warm water (frequently a quart). The resultant solution contains the appropriate amount of chemical agents in proper strength. The agents are similar to the ones described for douche powders.

Powders are used to prepare solutions for vaginal douche, i.e., for irrigation cleansing of the vagina. The powders themselves may be prepared and packaged in bulk or as unit packages. A unit package is designed to contain the appropriate amount of powder to prepare the specifi ed volume of douche solution. The bulk powders are used by the teaspoonful or tablespoonful in preparation of the desired solution. The user simply adds the prescribed amount of powder to the appropriate volume of warm water and stirs until dissolved.

Among the components of douche powders are the following:

Douche powders are used for their hygienic effects. A few douche powders containing specific therapeutic anti-infective agents such as those mentioned in the discussion of vaginal suppositories are used against monilial and trichomonal infections.

A number of solutions are administered rectally for local effects (e.g., hydrocortisone) or for systemic absorption (e.g., aminophylline). In the case of aminophylline, rectal administration minimizes the undesirable gastrointestinal reactions associated with oral therapy. Clinically effective blood levels of the agents are usually obtained within 30 minutes following rectal instillation. Corticosteroids are administered as retention enemas or continuous drip as adjunctive treatment of some patients with ulcerative colitis.

Rectal enemas are used to cleanse the bowel. Commercially, many enemas are available in disposable plastic squeeze bottles containing a premeasured amount of enema solution. The agents are solutions of sodium phosphate and sodium biphosphate, glycerin and docusate potassium, and light mineral oil. Instruction from a pharmacist is advantageous to ensure that the patient correctly uses these products. The patient should be advised to gently insert the tip of the product with steady pressure and be told that it is not absolutely necessary to squeeze all of the contents out of the disposable plastic bottle. The patient should be told that the product will most probably work within 5 to 10 minutes.

Suppositories are solid dosage forms intended for insertion into body orifices where they melt, soften, or dissolve and exert local or systemic effects. The derivation of the word suppository is from the Latin supponere, meaning “to place under,” as derived from sub (under) and ponere (to place). 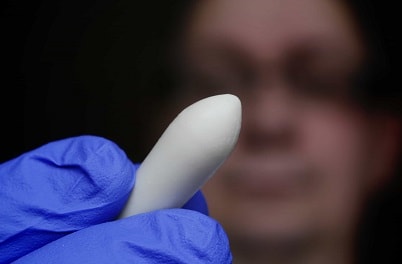 The most commonly used base for vaginal suppositories consists of combinations of the various molecular weight polyethylene glycols. To this base is frequently added surfactants and preservative agents, commonly the parabens. Many vaginal suppositories and other types of vaginal dosage forms are buffered to an acid pH usually about 4.5, consistent with the normal vagina. This acidity discourages pathogenic organisms and provides a favorable environment for eventual recolonization by the acid- producing bacilli normally found in the vagina. The polyethylene glycol–based vaginal suppositories are water miscible and are generally suffi ciently fi rm for the patient to handle and insert without great diffi culty. However, to make the task easier, many manufacturers provide plastic insertion devices that are used to hold the suppository or tablet for proper placement within the vagina.